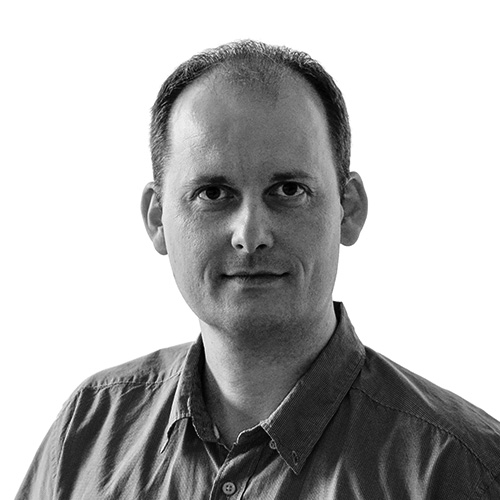 Born in 1977 in Lodz. Between 1997 - 2002 he studied at the Graphics and Painting Department of the Strzeminski Academy of Fine Arts in Lodz. In 2003 he got his diploma at the Studio of Lithographic Techniques at the same academy. Since 2004 teacher’s assistant at Professor Witold Warzywoda’s Studio of Lithographic Techniques. In 2012 he realized a research on the application of acrylic polyester plates in planographic print. Since 2014 participant of many national scientific conferences dedicated to lithography: in 2014 scientific conference organized by the Academy of Fine Arts in Gdańsk, in 2015 at the Leon Wyczółkowski Regional Museum in Bydgoszcz and in 2015 and 2016 conferences at the University in Rzeszow. In December 2014 he realised his doctorate entitled “The Elements - a Series of Prints Inspired by Landscape in the Planographic Techniques” and obtained the title of doctor of arts. He is the author of five personal exhibitions in Poland and in The Netherlands. He specializes in lithography, digital print, painting, photography and graphic design. Winner, among others, of the Best Diploma Award at the Exhibition Generation 2003 at the Central Museum of Textiles in Lodz. He participated in over sixty national and international group exhibitions of printmaking in Poland and abroad, such as Percorsi dell’incisione contemporanea: da Lodz a Urbino, Casa natale di Raffaello – Bottega Giovanni Santi, Urbino, Italy; Museo della Stampa, Soncino, Italy (2005); XII Biennale Internationale de la Gravure et des Nouvelles Images, Sarcelles - Val, France (2005), The 40 th Yokosuka Peace Exhibition of Art, Yokosuka, Japan, (2009) or The Knowledgeable – Initiates. Masters and Students of Graphic Arts, Kobro gallery, (Strzemiński Academy of Fine Arts Łódź); Koridor Gallery, Fakulta Umeni, Ostravská univerzita v Ostravě, Czech Republic, 2014; Contemporary Art Gallery, Łomża, 2014; January's Mist, Gallery ISBE in Edmonton, Canada, 2014. Participant of several Art Auctions in Warsaw, Łódź, Sopot and Katowice. His works are in the collections of institutions in Poland, Italy, Japan and private collections in Europe and USA.