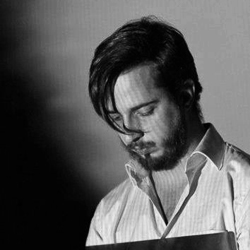 Diogo Tudela (Porto, 1987) is an artist and independent researcher

mechatronics and simulation. His recent work responds to oblique

cosmogonies and the  dialogue between technology and western

As part of the SOOPA collective, Diogo has been developing work within

the interceptions of dramaturgy and computation in collaboration with

of Contemporary Art (Porto) for his "The Machine is the Garden project", and

was a semifinalist on the Margaret Guthman Musical Instrument Competition

held by the Georgia Institute of Technology (USA). In the same year his short

film Three Parrots from Guadeloupe was included in the BAFTA Qualifying

for the production of Solar Paramétrica, and also with a grant by DGArtes

for the production of an on-line narrative in synthetic environments.

Diogo Tudela holds a BA on Sound and Image, and an MA on Digital Art by

the Catholic University of Porto, where he lectured between 2012 and 2014.