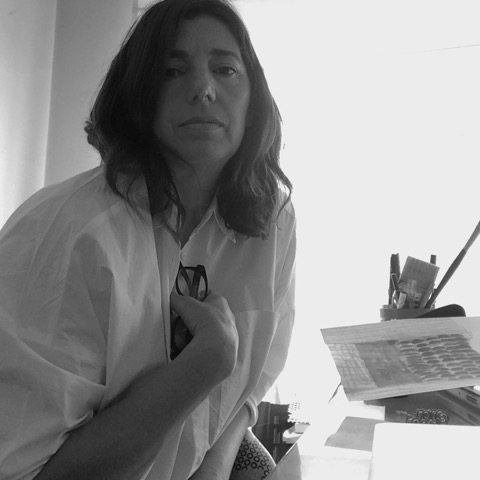 She initiates her studies with a Fashion Designer Course in Citex, where she later taught and became an Assistant Coordinator in the same course. She then developed, at the same time, a strong professional connection with the textile industry, not only in fashion design but also in textile design, and had her own collection available in many shops. By then, she did a Postgraduate course in Textile Design, in the area of weaving, in the Florence Academy of Fashion Design. Later on, she graduates in Fine Arts, in the Faculty of Fine Arts in Porto, in the area of Painting, where she concluded her Masters in Drawing and Printing Techniques, focusing her investigation on the intersection between Drawing, Textile and Body.

She has exhibited her work as a Plastic Artist since 2002.

She was recently invited to be part of 2016's Contemporary Biennial of Art and Textile by Contextile - Porto - to exhibit her work though especially for the Biennial, named as Reckless Territories. This exhibition took place in CAAA, and had the support of Calouste Gulbenkian Foundation. It is possible to highlight the exhibition Decisive Melancholia, which took place in the Romantic Museum in 2015; and the exhibition End and Pick , which took place in Lugar do Desenho, in Júlio Resende Foundation (2016). In the current year the Biennal of Maia invited her to participate with a Printmaking work, in the project- Body and Architecture. (2017)

She teaches Textile Technology in the discipline of Project and Technology at ESSR.

Currently, her work is developed between Painting, Drawing, Textile and Video where

Textile assumes itself as a means of conceptual, formal and plastic research. This variable printed into textile involves not only her artistic work but also the courses and training given, as the courses she proposed for Formação Contínua at FBAUP - Shibori - Drawing by Textile Folding ; In the Weft of Drawing and By a Thread - Dynamic of Textile Language. The courses do not take a linear approach to subjects, but interconnect with other fields such as the Drawing and the Engraving where the most important issue is to work in the intersticial places amongst different subjects.